Visit the modernist city planning of Le Corbusier in Chandigarh. Not exactly light relief, but the only successful implementation of Milton Keynes anywhere in Asia. A quick stop before we move on... 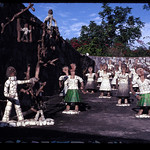 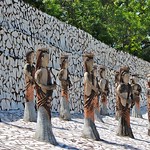 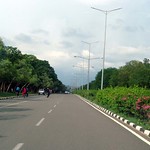 This is a city of lofty ambitions and quixotic delights, from the planned blocks to the freewheeling artistry of the Rock Gardens. Chandigarh sticks out from the rest of India and makes no apologies in doing so.

Chandigarh is capital city to both states of Punjab and Haryana. Both states have had a long history of struggle with the partition with the exodus of people to and fro across the border. Chandigarh is Nehru’s dream of a planned city with the help of Le Corbusier to build a new Lahore. So what you see is a planned city of blocks with a man-made lake, tree-lined wide avenues and a lot of people living an idealistic life. In fact, there are areas where it would be best to simply sit and philosophise.

However, Chandigarh has its quirks in Nek Chand’s Rock Garden made from discarded stuff used to make sculptures and puppet-like art. This mishmash wonder brings to Chandigarh the ‘fun’ element it so requires when you turn a corner. For the post-modern outlook that Le Corbusier designed, the Rock Garden sends a kitschy reply in a more post-modern manner.

This is a 40 acre fantasy park created by Nek Chand Saini whose work is housed in museums across the world. Recycling trash into art was initially done illegally and hid from the authorities for 18 years! When it was discovered it had already grown into a 12 acre area. Nek Chand and the authorities have had a long cat and mouse history and so when he left the country for a lecture, the authorities withdrew funding. The Rock Garden is now solely funded by a society that looks after the administration and preservation of the sculptures. This garden and its cement and concrete sculptures covered with pottery, ceramics, broken glass, bangles, metal and other recycled items has its own waterfall. The site garners more than 4000 visitors every day and is thought to be second only to the Taj Mahal in India in terms of footfall.

Chandigarh is a great stop for heading out to Kashmir or Leh and is the best stop onward to Shimla making it a must-visit place in North India. If not for anything else, visit Chandigarh for its idiosyncrasy of ideas.

In the Same Area: